The Winnipeg Jets have returned to the NHL! Okay, they have been back for four years, but now they are playing great hockey, but unfortunately they are in the tough Central Division. Paul Maurice is the coach of the Jets and even though he is only 43 he became the youngest coach reach the 1,000 game milestone as head coach of an NHL team. He had previously coached Hurricanes from 95-2003 and then again from 2008-11. He had also coached the Maple Leafs from 2006-08. The Jets have experienced players such as Andrew Laad and Dustin Byfuglien who were part of the 2010 Stanley Cup Champion Chicago Blackhawks. 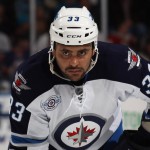 Andre Laad is the captain of the Jets and leads the team with 31 points(14G, 17A). Dustin Byfuglien is fourth on the team with 22 points.The Jets also picked up Michael Frolik from the Blackhawks and he was part of their 2013 Stanley Cup champion team. He brings the speed game to the Jets and is very effective on penalty kills. Speaking of penalty killing the Jets were 18th after the 2013 season and are currently ranked 7th. Special teams are key to a teams success, but their power play is only ranked 21st. The Winnipeg Jets finished 10th in the Western Conference and were out of the playoffs. The sudden fall of the Avalanche this year has helped the Jets. Colorado Avalanche were the unexpected Central Division champions last year lead by rookie coach Patrick Roy, but they have not recovered from their 1st round upset loss to the Minnesota Wild and the departure of Peter Statsny. The biggest blow has been the recent injury of forward Evander Kane who will be out until early February. Kane has 15 points in 26 games. If the Jets can continue to be strong on the penalty kill and improve on the power play they will be tough team to compete against as they have shown in their recent dominating 5-1 effort again the Blackhawks in Chicago.