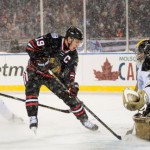 When the first NHL outdoor game was played I thought it was a unique idea and great marketing for the NHL. I thought the scheduling of these games against college football was a mistake but I was proven wrong. Since the inception of the Winter Classic back in 2008 these games have had an average ratings of 4.1 million viewers and the six Winter Classic games are the most watched regular season NHL games since 1975.

In the 2013-14 season they decided to have 6 outdoor games which included one warm weather city with the Ducks playing at the Kings. This is the L.A. Kings and not the Sacramento Kings for those of your who are lost looking for an NBA blog. I have to admit I thought the ice would melt or sand would get on the ice with the volleyball nets that were set around the rink. There were also two games at Yankee stadium, one at Soldier Field in Chicago where the Chicago Bears play, one in the Big House with the Red Wings and one in Vancouver. Did anyone know about the Senators vs. Canucks game? Was this on Hockey Night in Canada?

I personally would prefer to have just the Winter Classic as the showcase outdoor game and show the Bridgestone sponsored games once every 5 years. I truly believe people will lose interest over time if there are too many game plus the Winter Classic is on New Years Day when everyone is off. I could care less about college football and it looks like there are many other casual hockey fans that rather watch hockey than football.