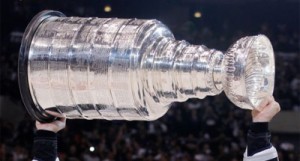 The NHL playoffs were once again very exciting. The playoff format was different as the usual 1 through 8 seeding in each conference was changed to a wild card format and teams playing initially withing their own division. The Colorado Avalanche were the surprise Central Division with rookie coach Patrick Roy leading the charge. He won the Jack Adams for coach of the year. I have to admit I thought he was going to have a rough year as a first year coach and his reputation for a temper. We saw his temper in his very first game when he was yelling at Bruce Boudreau. The youth of this team seemed to catch up to them as they lost game 7 at home to the Minnesota Wild. The Avalanche lost Paul Stastny to St. Louis but the Calder Trophy winner, Nathan Mackinnon, and Lady Byng winner, Ryan O’Reilly will be back to help the Avalanche to defend their division championship

The defending Stanley Cup champion Chicago Blackhawks were able to come back from a 2-0 hole from St. Louis but the won the next 4 games and won a tough series against the Blues. The Blackhawk fans with all the red hockey jerseys were as loud as ever at the Madhouse on Madison. Brent Seabrook was suspended for 3 games in the series for knocking out the Blues Captain David Backes. It was a bad hit and he deserved to be suspended and Backes was fortunately able to return. Jonathan Toews had the critical OT winner in Game 5 which seemed to deflate the Blues and the Hawks won Game 6 with a big third period. Duncan Keith, the Norris Trophy winner, had 4 points in the game.

The Blackhawks faced the Wild in the next round which was a tough series to watch at times because the Hawks never seemed to play their best hockey in this series but credit needs to be given to the Wild and their tough defense. The Wild were in a tough position because just like last year they had to play with their back up goalie which should have been a huge disadvantage. Patrick Kane had the sweet backhand flip goal in game 6 of to win the series.

The Blackhawks were the last Central Division team left and they would lose an exciting 7 game series against the Kings. The Kings would go on to win their 2nd Stanley cup in 3 years. The Blackhawks and the Kings have each won 2 Stanley Cups in he last 5 years. I look forward to the 2014-15 season with all the new players with all the trades that occurred last month.

I hope to see a game in California this year. I saw the Padres and Chargers play last year. I was thinking of San Diego during the cold winter in Chicago. Too bad they don’t have a hockey team!