The Chicago Blackhawks decided to send Finnish phenom Teuvo Teravainen to the Rockford Icehogs. He played just 3 games at the end of last season for the Hawks when Patrick Kane was injured. He played for the Jokerit Helsinki-Finland and he had the following stats in the last 2 years – 2012-13: 44 GP, 13 G, 18 A; 2013-14: 49 GP, 9 G, 35 A. The NHL recently released its top 60 prospects and Teuvo T. came in fifth. Based on the limited play with the Blackhawks he looks to be a very good skater and puck handler and will be more of a play maker than a goal scorer. At some point in the second half of the season I expect him to be called back to the Hawks. 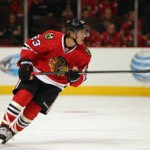 The St. Louis Blues were able to land Jori Lehtera. He had been with KHL and now joined with Tarasenkso they have elevated to Blues to first place in the divison. Lehtera has played 16 games and has scored 7 goals and 10 assists and has helped Tarasenko to be the team leader in goals and points. Lehtera recently played for the Novosibirsk Sibir where he lead the team with 32 assists and 44 points.

**Where the heck is Novosibirsk? It is a city in Russia, but did you know it it the third most populous city after Moscow and St. Petersburg and is located in southwestern Siberia. I love geography so deal with it or I will send you to Siberia. http://en.wikipedia.org/wiki/Novosibirsk